Roaming outside in the yard;

A cat’s life is good!

Once the weather became milder and snow-free, Hemingway was keen to get roaming in our yards. I’d hazard a guess that it partly reminds her of her early kittenhood days, when she’d roam around with her siblings before we adopted her.

So, these days she wants out…..comes in for brief respites and some munchies….and then out she goes again.

I always enjoy watching her…even when she’s just there resting and taking it all in.  Her ears are always on alert.  In the first photo, her ears are turned back; she’s heard something of interest. 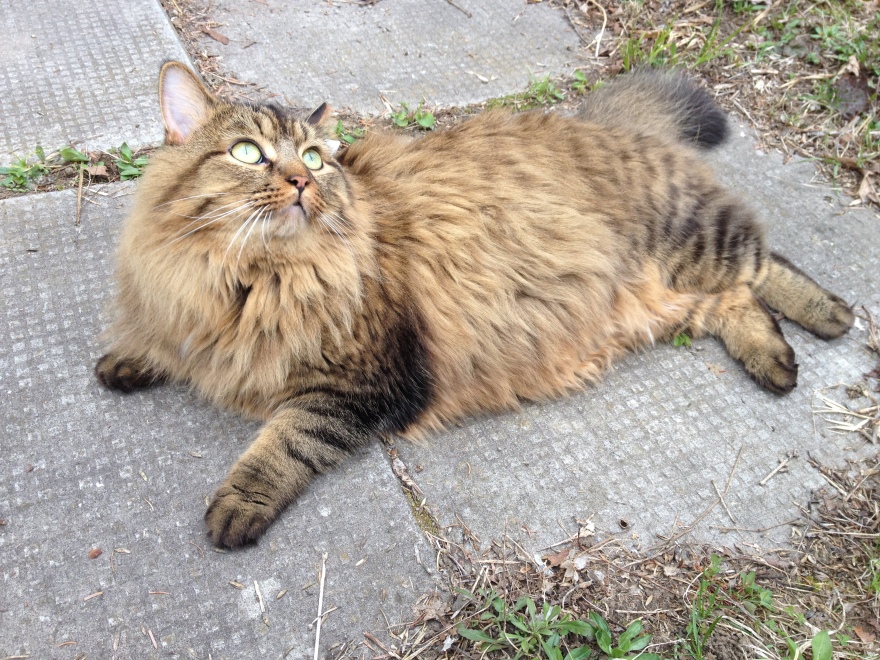 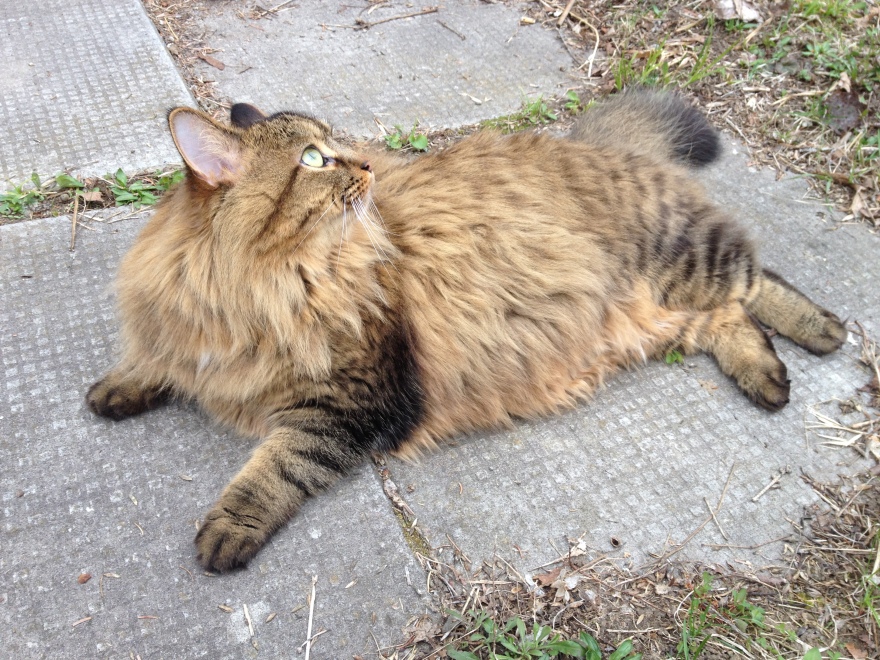 And in her reclining position (in these two photos), she enjoys watching birds flying overhead or just critters moving about.

I just love looking at her pretty, shaggy, and soft coat.  And how she is always at peace and so calm.  Always totally comfortable.

“Hemingway, is it time to come in for some snuggles and food?”

Higher than all the others;

A leader of trees?

On Monday I was doing some pre-season cleaning prep work at a cottage and trailer campground area on White Lake, known as Pickerel Bay Lodge.  After I was done working, I went on a little walkabout, as it had been in early October of last year when I was up there last, just as the resort season ended.

In one particular spot there had previously been three small cottages  – the cottages were in need of some kind of upgrade – and that had been cleared and replaced with three new trailers.  Some of the surrounding vegetation had also been cleared out, which made  this spot with the trees more visible.

And there was just something about those trees that caught my eye.

A mixture of clouds,

Held in the sky and captured

Below in the pond.

There is a dairy farm down the road from us, and throughout the summer there is a good-sized pond along the one side of the pasture field where the cows spend the majority of their time grazing.

Last week as I was walking along, it was initially the setting sun that caught my eye and then how the sky “painting” was looking equally beautiful in the pond water reflection.

There are such different clouds in the sky, too – from a large bluish one on the right and then some wispy white ones toward the left, along with some bigger whiter ones that look as if they are “painted” with strokes going almost perpendicular to the blue one.  With those dark tree silhouettes, I was so impressed with this spectacular view.

What’s one benefit for a girl when she hangs out with her girlfriend?

How about an opportunity to pull on some work gloves and help in the building of a chicken coop!

On two different weekends this spring, i drove up to my girlfriend’s off-the-grid house, located in some picturesque countryside, and we spent our time outdoors with hammers and nails, a cordless screw driver, an electric saw, a wheel barrow, various bits of lumber, and chicken wire, We were lucky to have sunshine and a breeze gently blowing for all those days, as we measured and re-measured, sawed and hammered, lifted and moved and adjusted……and ended up with two good-sized wooden chicken coops of different designs – one for a couple of laying hens and the other one for raising a half-dozen chicks.

And even though I was initially more of an assistant, I noticed that our teamwork evolved in such a way where my input, suggestions, and questions were welcomed, as well as often sought out.

We made a few mistakes – that’s natural, since this was our first such project – and there were several times, when we had a good laugh about something:  for example, one time in our “lifting-a-heavy-rock” scenario!  In the end my girlfriend and I surveyed the two fine-looking chicken coops……with big smiles on our faces.

What an immense feeling of joy and satisfaction in our achievement!

NOTE:  The photos were taken the one time I walked – since I’ve started this new regimen (last Thursday) – and I wanted to show the country road….so peaceful to walk along.  As well as those pretty pink clouds of the approaching sunset in that blue background…..and one photo showing a coming together of pink clouds with darker blue clouds….two waves rushing towards one another.  🙂