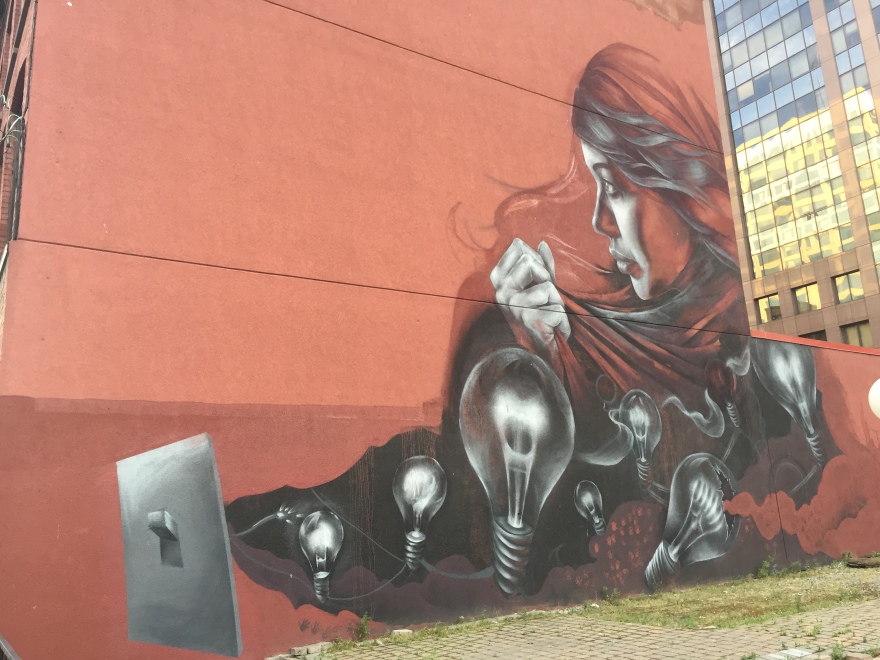 In our world we can all use a little more light, right?

And how handy!  At the flick of a large switch.

Such a warmly tinged 3-dimensional painting!

I wonder how visible this wall mural is at night, as I only saw it during the late afternoon a couple of days ago.  There might be some street lighting or next-door building lighting shining on it.  And what if the artist incorporated some kind of luminescent lighting effect in this painting?

Maybe I will get to see for myself some night.

And on a multi-storied building, too!   So HUGE!  And also colourful.  The construction at the left distracts a little bit.  What can you do?  Editing would only let me do so much.  Oh well.  🙂

I like this one, because you see the main images, but then it keeps drawing you in to look for those smaller details.  Fascinating creatures in all kinds of strange activities.

It seems I have accumulated quite the nice collection of outdoor wall mural art, which is becoming more apparent each time I look through my folders of photos for writing ideas.   A good thing, I realize, as I will pull out more of them for future blog posts.

I love discovering and looking at these artsy wall murals when I go on my walks….and it can be a good challenge for photography, too!

Well, I suppose it has a lot to do with the fun and diversity of this art form, plus, on building walls the art is public and free to look at as often as you wish.  To enjoy the ideas that all those creative and ingenious artists conceptualize and then bring into a physical vision.

(Photo taken while on a walk through some of downtown Reykjavik, Iceland, in May 2016)

Continuing on with some more fun and creative license plate words and names that I have discovered in the past two weeks….

Again, some options are:  someone who enjoys putting a religious touch to things…..OR…..it’s someone’s favourite song?

Well, and here,…..Fawn has a pretty spiffy looking Nissan!

So fascinating how in one day, one can look up at the sky and see such diversity in cloud formations as well as the colour of the sky!

These three photos were taken at just a few hours apart, when I was out visiting a friend yesterday – the first two being also within a few kilometres of each other, and the last one  near another town (some 30 kms away).

What caught my eye – when I was looking facing east around 1:15 p.m.-  was the two-tone blue colouring of the sky.  I don’t recall ever seeing one part of the sky being a pale blue and the other such a deeply, rich blue.  It looks as if the atmosphere closer to the earth is reflecting that lighter shade of blue.  And looking up into the higher atmospheric levels, the blue becomes darker in hue.  Usually, when looking at the sky, it tends to be one shade all across.  Unusual, don’t you think?

I snapped this next photo – around 3:30 p.m. (facing west) – because this cloud looked so MASSIVE and had such interesting features to it.  Tufts here, splays there, some in-curling to be seen at the bottom.  It was only when I looked at it again just now that my imagination kicked in and I spied a sea creature in it.  Mind you, it’s many, many times larger than in real life!  Haha!

Do you see a crab?  Upright?  With its two claws on either side at the top and its many small feet at the bottom end? 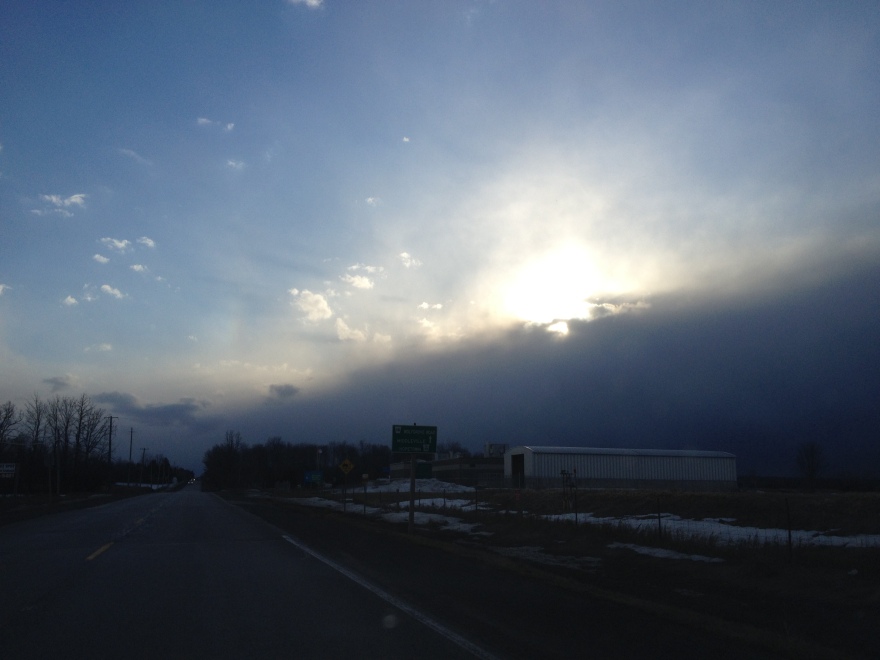 The sky is fairly clear of clouds outside of the one solid wall of cloud on the right, and it’s nestled right down to the horizon level.  Here the sun is still able to peek along the top.  And it’s back to the one unified shade of blue for the sky.

Once again a spectacular sky show!

The silly ideas one gets whilst standing behind a car and one’s gaze drops to that car’s license plate…..because it ISN’T just a random selection of letters and numbers but sometimes inventive, creative, or just funny words!

They are personalized expressions of these car owners and meaningful to them in a myriad of ways.

Here are three that I have spied just in the past month….all in Ottawa.

I suppose this might be the beginning of a new photo collection? 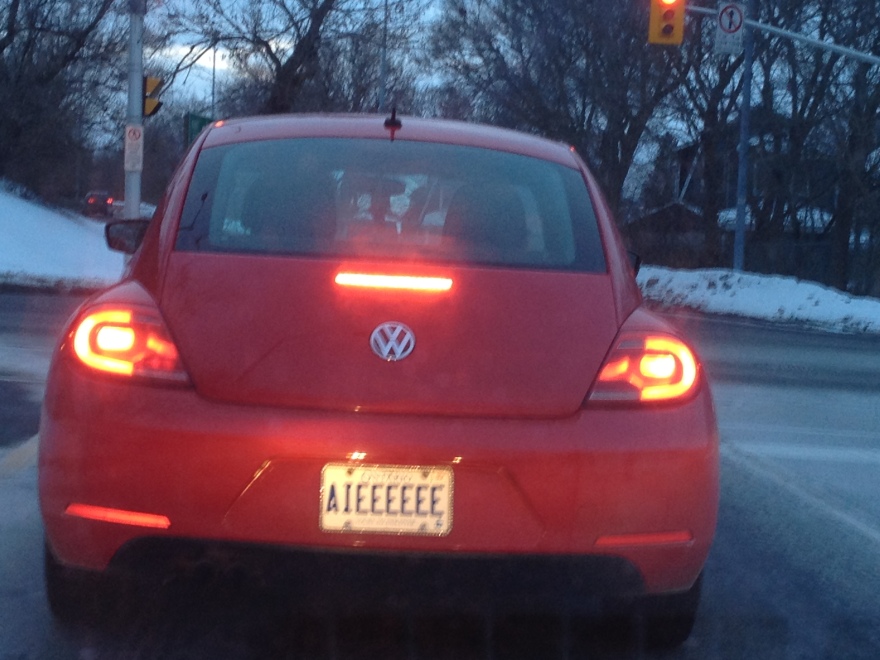 This one has me intrigued.  Is it a business?  Or someone likes catlids….as opposed to doglids.  Who knew they had lids?  Eyelids, maybe?  What other lids could they be?

Ms. LEGO bride and Mr. LEGO groom exchange rings and say “I do.” 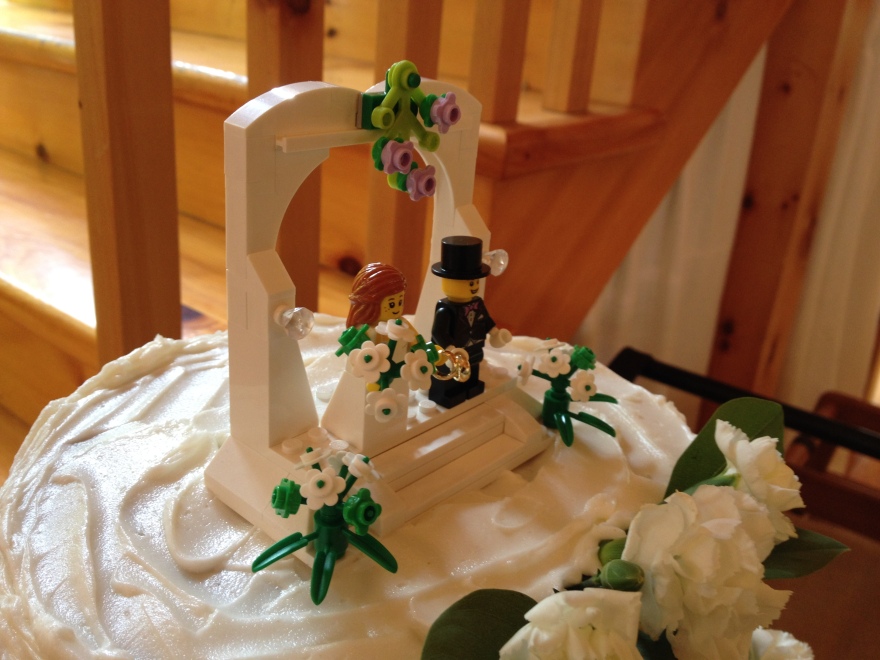 Note:  At a wedding event that I worked this past August – for the daughter of some friends of mine – I was able to take some photos of the decor before the ceremony started, which took place in the garden outside.

In our family we are huge LEGO fans!  Along with books and puzzles and a variety of other educational toys, we played daily with our LEGO blocks and pieces as the children were growing up.  Yes, the adults, too!  So, naturally, anything LEGO I tend to notice right away.  Like this wedding cake decor, for example.  Such a charming, whimsical touch.

Also, there were little LEGO figurines placed all along the fireplace mantle as well… 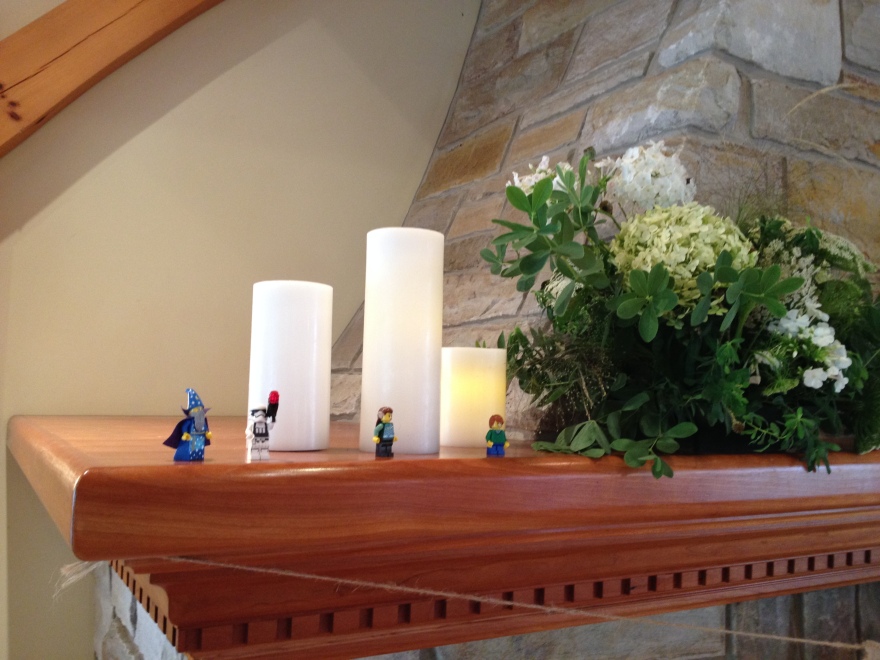 My curiosity was piqued as to the reason behind these LEGO additions.  The answer was revealed during the speeches portion of the reception, when the bride’s brothers highlighted one of their stories with reference made to their LEGO collection, which apparently was considered quite large until….compared to the groom‘s own “even larger” LEGO collection.  Haha!

You know you can’t resist!

There’s something about tumbling dominoes that captures the imagination, and some people have such a passion for it that they will spend a lot of time on design and construction of an intricate and short-lived domino falling spectacle.

Watch this link and be amazed!  It features a creation by Hevesh5.

Here’s an image for you to see…..to entice you.

This morning my Mom sent me a link that included a youtube link, featuring this wonderfully talented young lady.  She uses her feet in a most creative, entertaining, and imaginative way!

As she charmed her audience, so indeed did I fall under her joyful spell…. 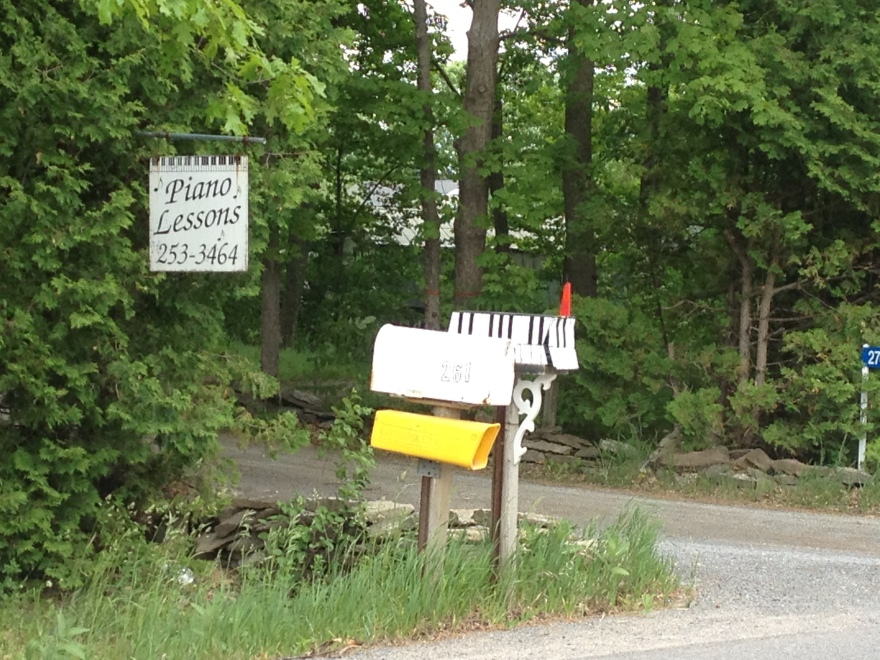 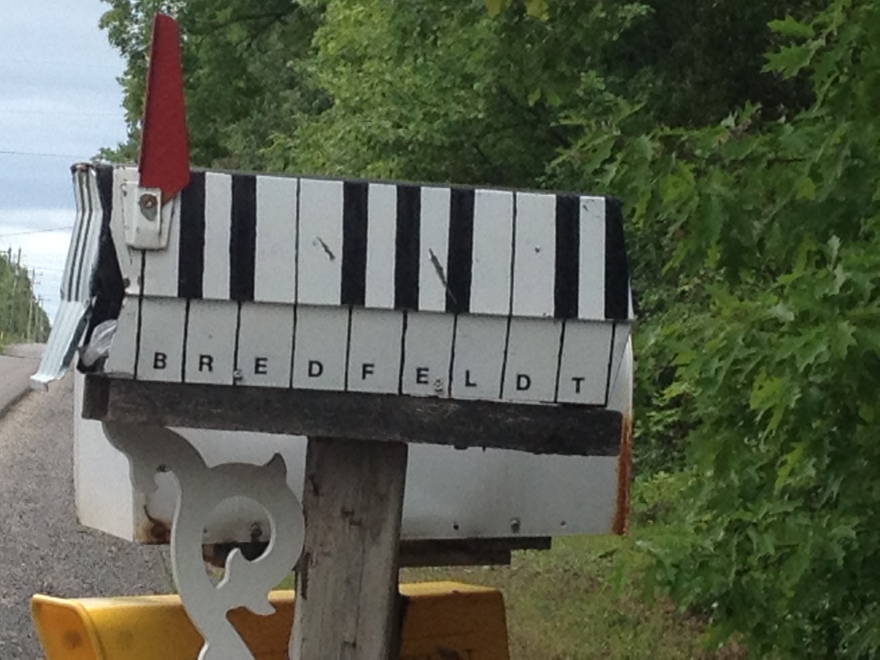 Last Wednesday after work I had some errands to run, and I found myself driving along a different rural road on my way into town.

That’s when I spied the black and white piano keys painted mailbox.

Aha!  Someone used an imaginative approach to advertise their music teaching services. Or maybe that person just wanted to have an unusual looking mailbox?

Hooray to the creative Bredfeldt family! 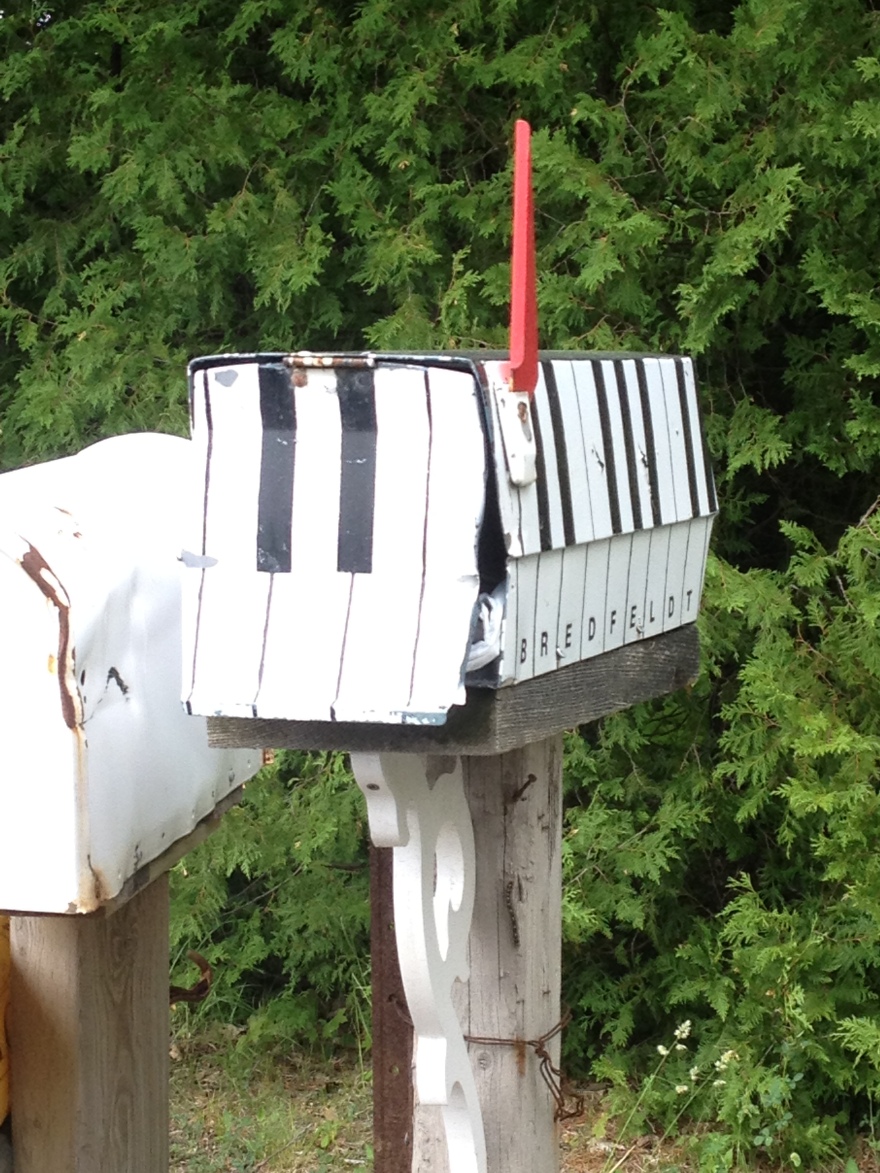