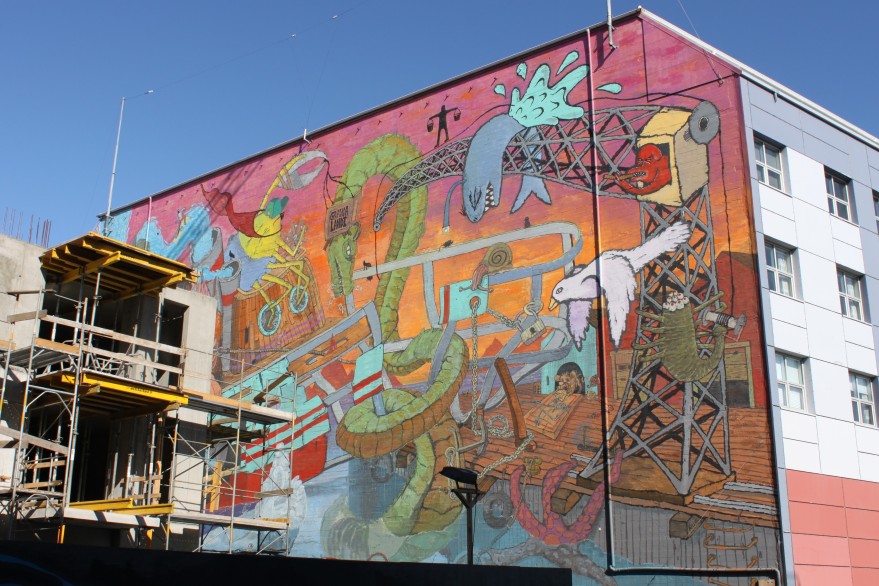 And on a multi-storied building, too!   So HUGE!  And also colourful.  The construction at the left distracts a little bit.  What can you do?  Editing would only let me do so much.  Oh well.  🙂

I like this one, because you see the main images, but then it keeps drawing you in to look for those smaller details.  Fascinating creatures in all kinds of strange activities.

It seems I have accumulated quite the nice collection of outdoor wall mural art, which is becoming more apparent each time I look through my folders of photos for writing ideas.   A good thing, I realize, as I will pull out more of them for future blog posts.

I love discovering and looking at these artsy wall murals when I go on my walks….and it can be a good challenge for photography, too!

Well, I suppose it has a lot to do with the fun and diversity of this art form, plus, on building walls the art is public and free to look at as often as you wish.  To enjoy the ideas that all those creative and ingenious artists conceptualize and then bring into a physical vision.

(Photo taken while on a walk through some of downtown Reykjavik, Iceland, in May 2016) 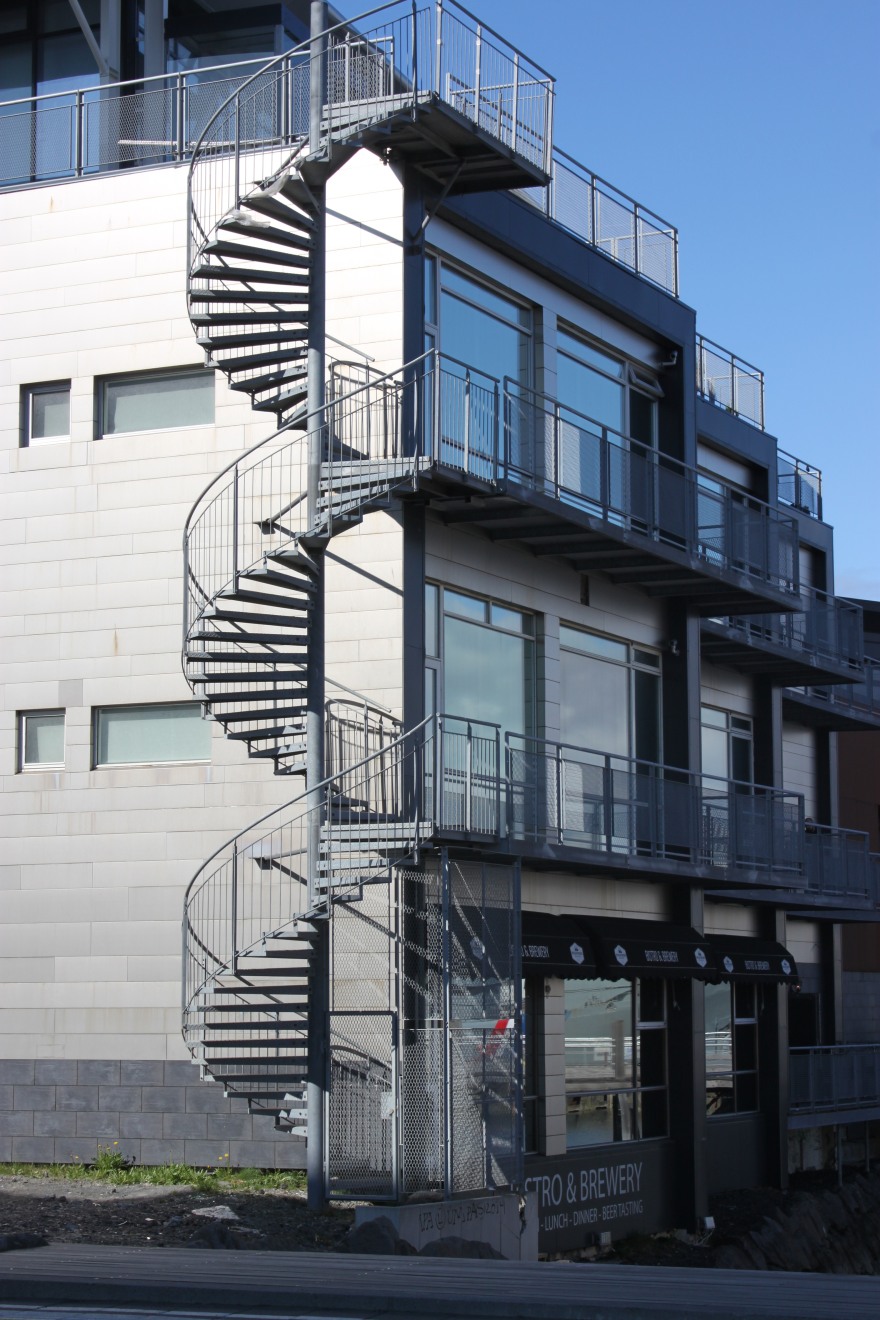 The outside spiral staircase attached to this modern style residential building stands apart and also fits right in.   Everything else on that building looks squarish and angular, and then the stairs have that flowingly rounded aspect to them.  So cool!

It’s at the one end of  the block of buildings, which also houses the Maritime Museum….in Reykjavik, Iceland. 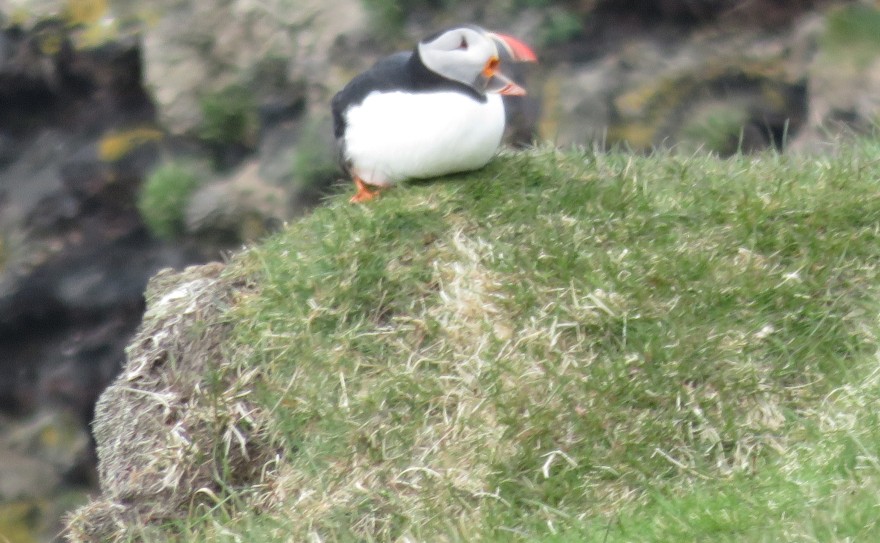 Well-adapted to their homes;

These photos were taken on my very brief introductory visit to Iceland in May of this year.  I thoroughly enjoyed the whole experience and am keen to go visit there again!

As part of a guided day-trip from Iceland via ferry to the island of Heimaey in the Vestmannaeyjar Archipelago, included was a bus tour around the island with a side stop to where the puffins and several other seabirds have some of their nesting grounds. 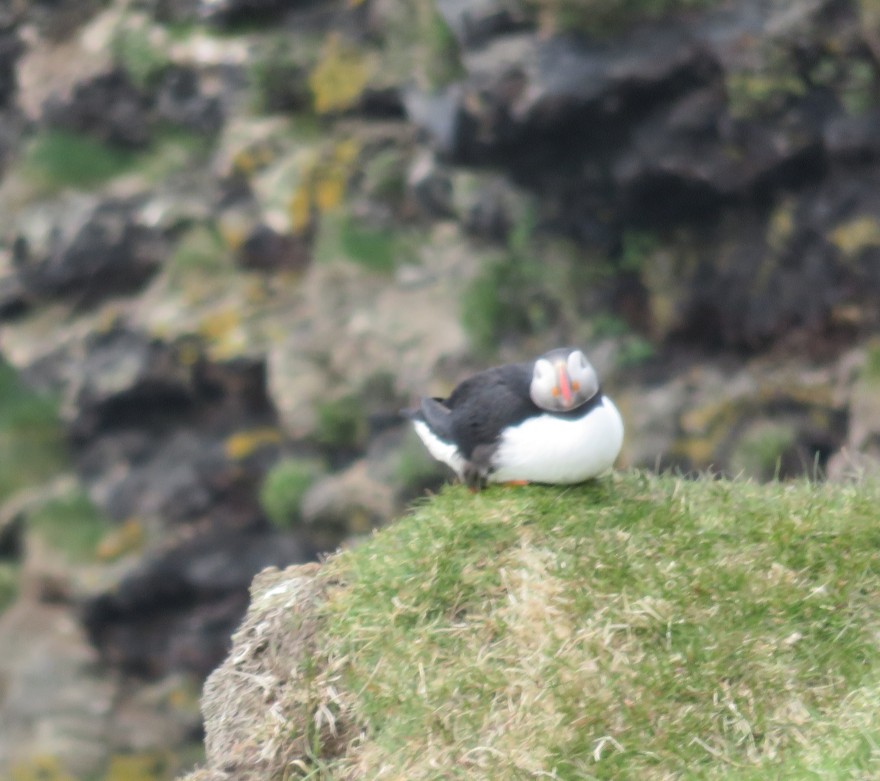 I brought two cameras with me, one of which had a small built-in zoom.  For the landscape views I used my regular DSLR.  Then depending on how the visibility would be for finding puffins and capturing some photos of them, I ended up relying on the other smaller camera for that.  As you will see, they were quite a distance away, so the zoom came in handy! 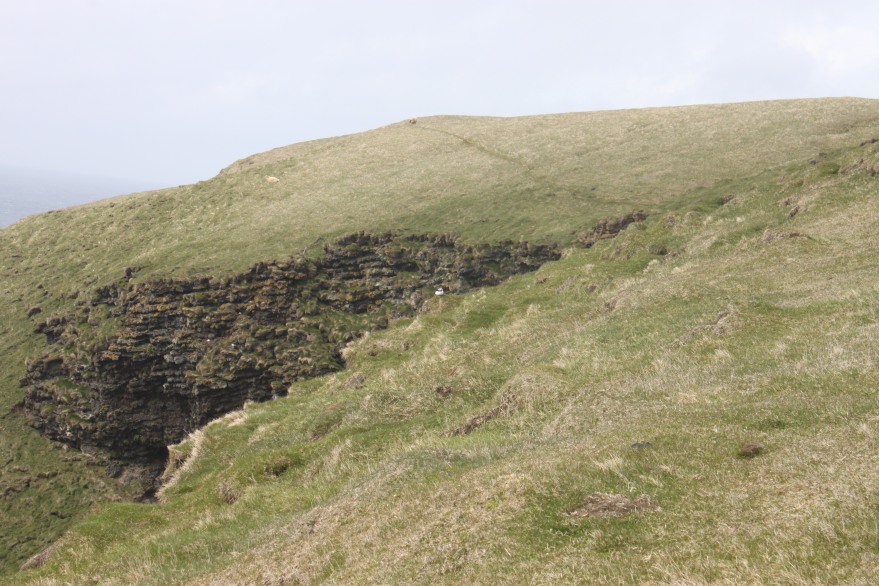 Smack dab in the middle of this photo, you can see a small white dot.  Yes, that’s the puffin.  And I’m standing right up against a fence, which you will see further down. 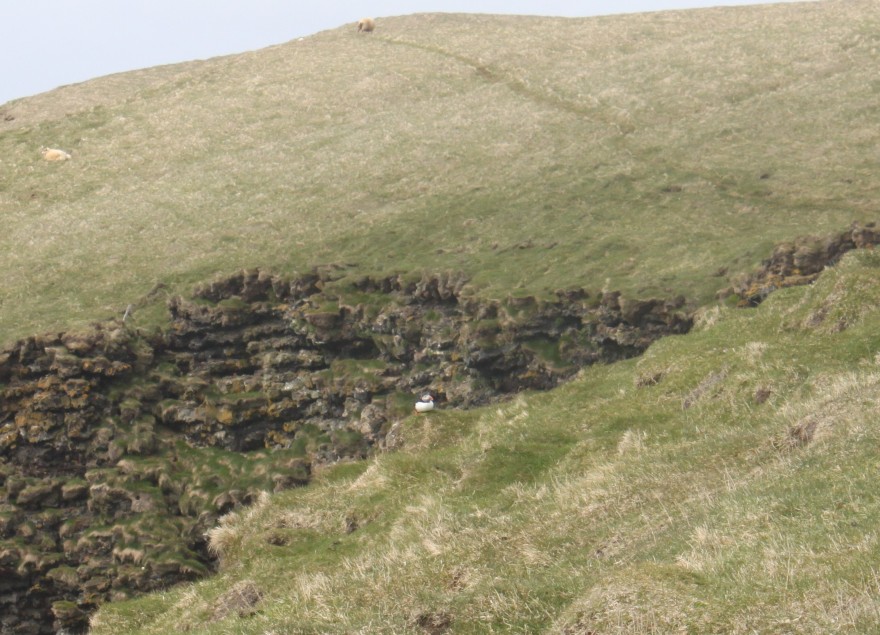 Here you can see it more distinctly, sitting on what looks like a precarious spot along the edge.

Needless to say, even after this shot, I realized that I would have to try the smaller camera to zoom in better and get more close-up photos, like the first two in this post.

Except that didn’t automatically ensure perfect photos, because, as our tour guide explained to us, we were on the “windiest part of all of Iceland.”

I took as many photos as I could – many of which were blurred – because the wind kept bustling my camera around, so my hands were more shaky than steady. There were even more advanced birders and photographers on this trek, who brought their HUGE cameras with LONG lenses…..tripods, too, I guess. But even so, I’m sure the wind was giving them a challenge as well 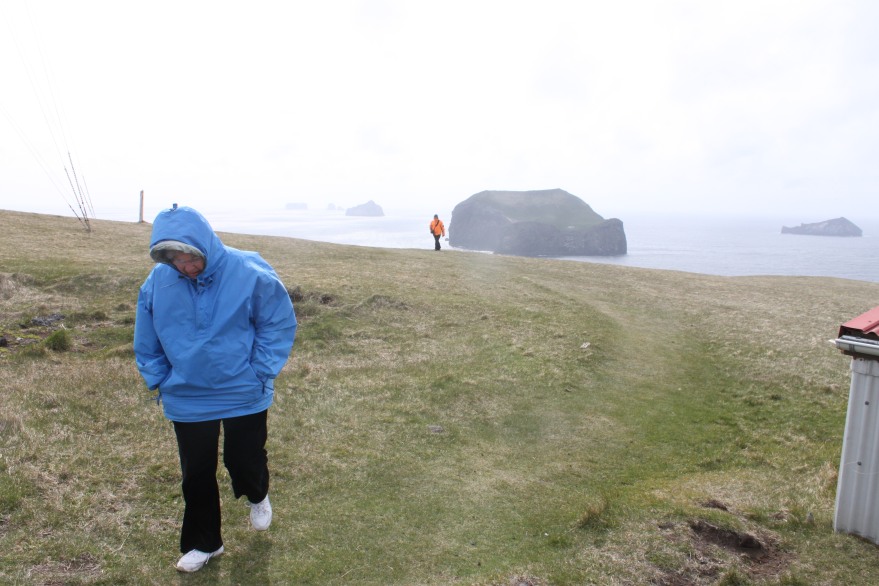 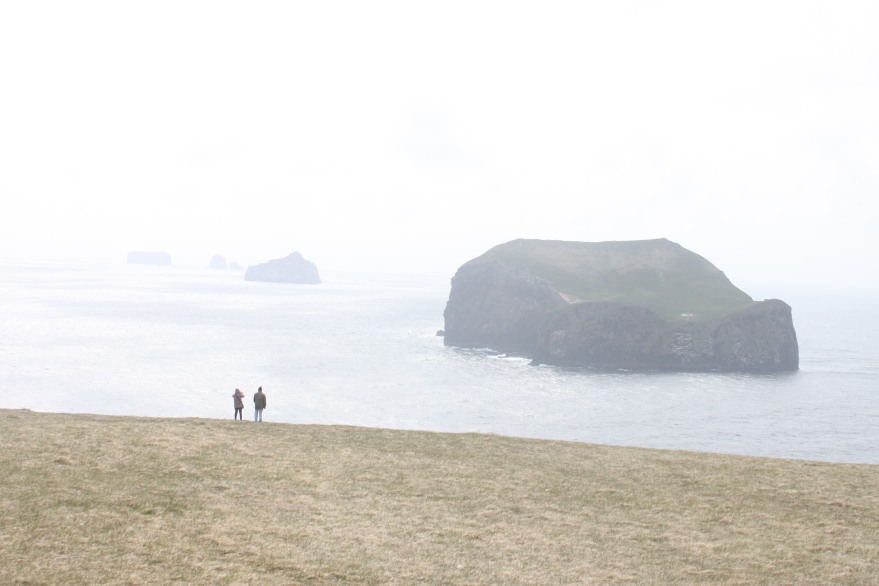 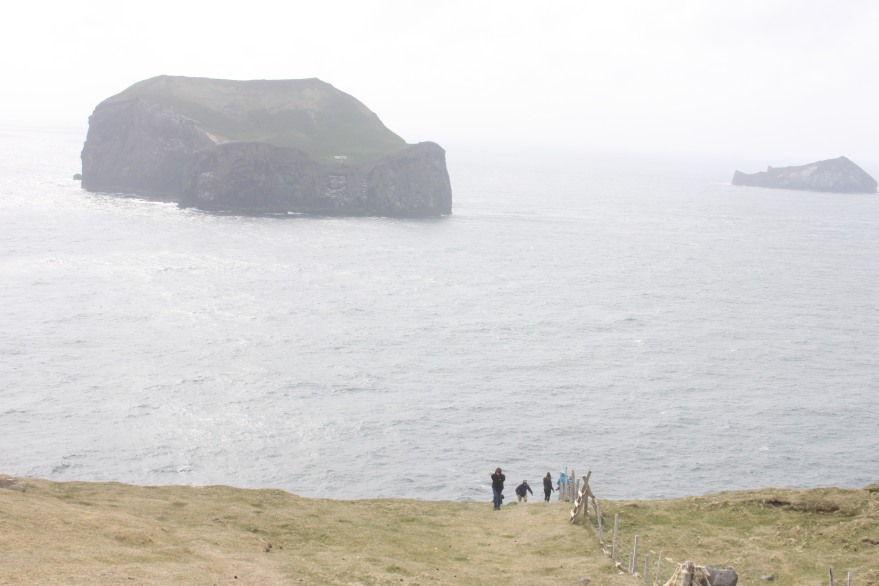 On the right side is the fence we could use as our guide to hike further down the path, and I suppose, to preserve the distance between us and the puffins. 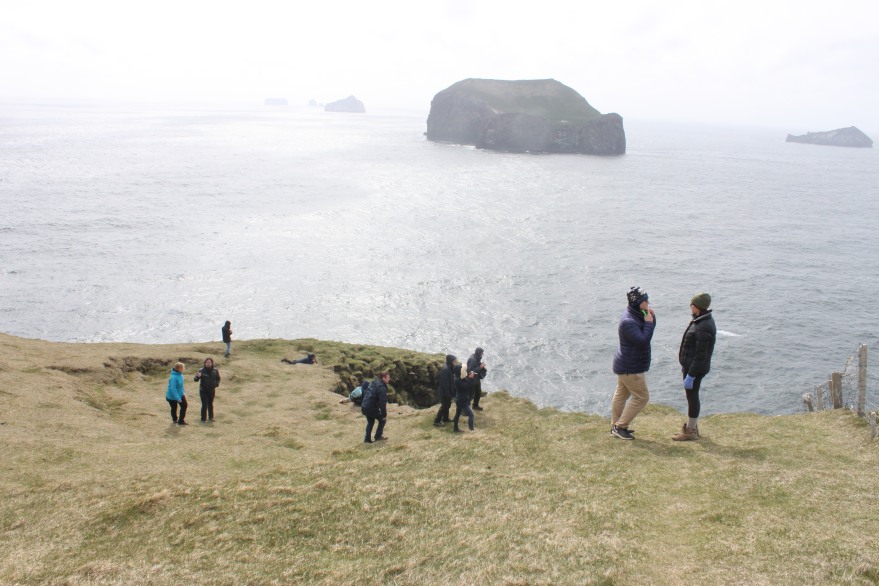 I went just a little further down from where I’m standing as I took this photo, and I think all those people below just went to that edge and then turned back. 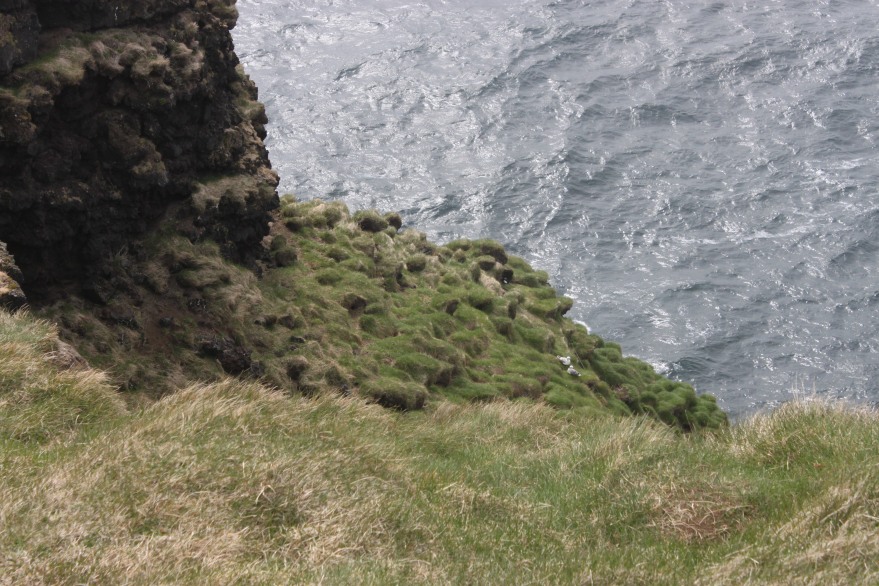 Taken from a little further down and quite near the edge……with the fence nearby to keep us safe.