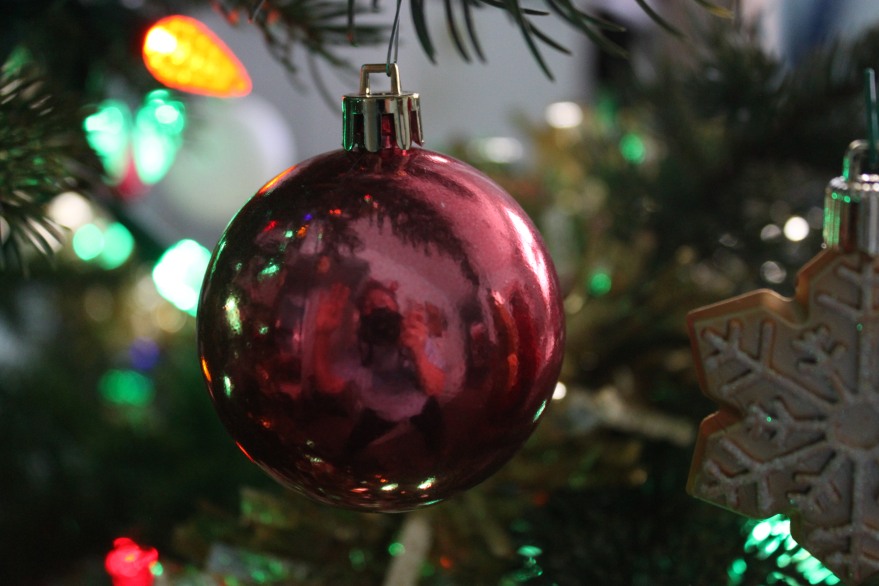 Inspired by a friend’s idea, I’m sending you a reflected wave with a festive backdrop and in the spirit of the season.

And nature has been generous with sending lots of the white ‘n fluffy stuff over the past few days.  I took this photo today of the blue spruce in our back yard – it’s roughly 25+ years old – that we planted when we first moved here. 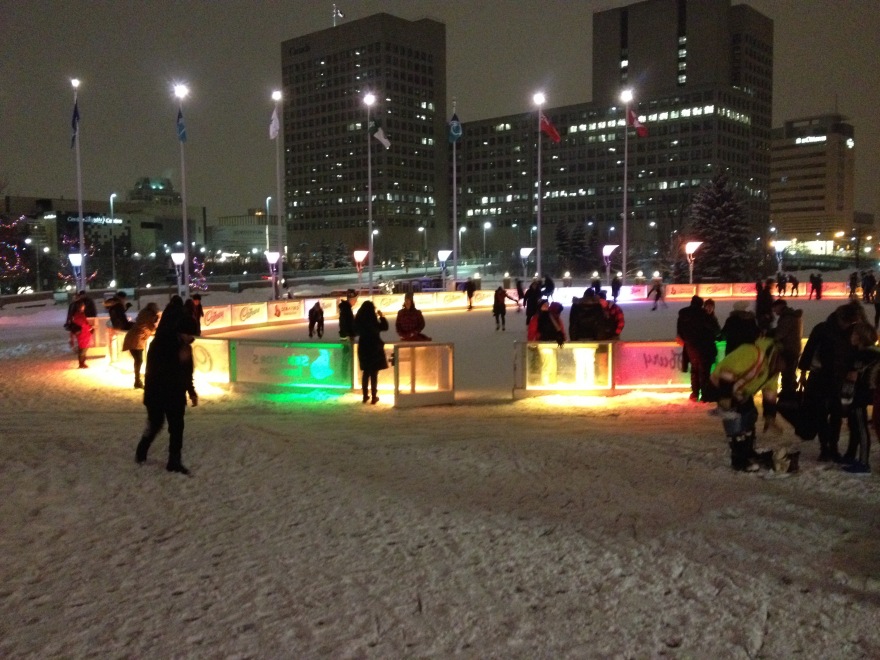 There is a cool-looking outdoor skating rink that finds a temporary home throughout the winter months, nicely constructed in the front area of Ottawa’s City Hall.

I have walked passed it at night a few times recently, as I was heading for the NAC – National Arts Centre  (which is located nearby) – to either see a play or a live music show.  The City Hall’s underground parking facility comes in handy for accessing various destinations in the area, and so in going to and fro, we passers-by get to see the enthusiastic skaters who make good use of this skating rink.

I think it is at its prettiest at night, when the edge of the rink is aglow in colours that continuously change from yellow to red to green to blue – always looping – thereby creating a magical and fun mood.

One of these evenings, I need to grab my skates and experience it for myself!

I uploaded my own video to youtube, so you can see for yourself…..

And a neighbourly hello,

Such a warm welcome!

When I was down to Picton on the South Island of New Zealand for my  visit in 2007 on the occasion of my girlfriend’s wedding, I had rented a tiny cabin as my home base.

And adjoining the property where my cabin was located, marked with a dividing fence – there were about 10 cabins in total – on the other side was the yard of someone who had some charming animals milling about.  There were several geese and sheep, and at one point these two came right up to where I was standing to get a really good look at me.   Haha!  Fair is fair, right?  I was being inquisitive about them.  So….it works the other way, too.

The fun part of blogging is, of course, in writing and creating stories and poems from within, along with photographs sometimes, and publishing them as a way of sharing those thoughts with others.

Another fun part is in discovering other bloggers and, even more, finding like-minded friends in one’s blogging circle.  Reading their creations, their thoughts, their dreams, their struggles.

I was just in the process of reading through some of my blogging friends’ posts, that I discovered one from Dora in which she writes that she is sharing the WordPress congratulated accomplishment of having achieved 1,000 followers.  As she writes in her blog (and I needed help translating from her native language, Italian), she isn’t one to boast about numbers, even though it IS exciting to see numbers increase.  She decided to share her accomplishment, as it goes together well with the arrival of her new book, for which she is tremendously excited (understandably!).  She gives thanks to all of her followers and those who encouraged her to pursue her dream.

So, why am I sharing her joyful news on my blog?  Two reasons.

And it’s that song – with a pronounced rock flavour to it – that I wish to share with my readers and friends.  I think the Manic Street Preachers do a superb cover of it.

And thank you, Dora, for your post and for your friendship.  I also congratulate you on your new book!!  Be happy….and keep on writing!  🙂

I have been nominated by my blogging friend, A , to the 3-day Quote Challenge.

Thank you again, my friend, for such an honour.

For today’s quote I picked one that seems to have become imprinted in my brain and heart from the first time I saw it several years ago.

“A mind that is stretched by a new experience can never go back to its old dimensions.”    – Oliver Wendell Holmes, Jr.

It appeals to me, because I have observed this experience in my life over and over.  Whether it’s in learning a new skill….or reading something with new ideas….or hearing a new song that touches in a deeper way….or trying out a new food.  Endless possibilities in life, really, for our minds to experience something new and to then move forward in personal growth or personal preferences.

For a simple example, in my case, I developed a liking for olives much later in life.  Before that time, I would steer clear of them.  And mostly because I didn’t know that much about them and partly because the flavour seemed so foreign.  Then!  One day I was given a new food to eat which included olives – black, milder ones – but still, it turned my mind over to the idea that, hey, olives are pretty fine.  Try them again.  And try them in this.  And then, well, perhaps the green ones aren’t so bad anymore.  And try those.  And before too long, I can’t imagine having certain foods and dishes WITHOUT olives.  It’s inconceivable!  Haha!  I love them so much now!

As I understand it, the 3-day Quote Challenge is comprised of:

And so, I nominate my writer/blogging friend, Stephen , for this challenge.

AND….in the spirit of the above quote, I’m including a photo of a Tea Party to which I was invited last year.  On the subject of new experiences, it was the first ever tea party for me.  And fun!   I met someone new – the friend of the host.  And there were some incredible delectables!  Taste combinations that were new to me as well.  My mind was given such a treat that day!  Moving forward again!

In this year’s google images, I picked this one to send out good wishes to all of you, my friends on wordpress.  I love the SPARKLIES!  Hahaha!

HAPPY NEW YEAR to you, my  Friends!!!  🙂  I hope you are all enjoying a fun celebration to ring in the next amazing year!  May your dreams come true or get just that much closer to coming true! May you find joy, kindness, and happiness in your every day! May you be in the best health yet! May you find yourself embraced in love and laughter for your next 365-day trip around the SUN!!

For a unique, new, fun, New Year’s Eve treat….my friend Deborah, Kirby (my husband) and I had a most enjoyable time dining at The Smokehouse Café in Renfrew, Ontario (approximately a 35 min. drive from our town, considering the snowy conditions).

Friends of mine, Bill and Sue and their staff (yay, Jessica!) provided us and another table of three (ladies also from the Almonte area) with a five-course delicious and gourmet meal. Wonderful service and laughs and good conversation as well. This photo shows the dessert – their pretty presentation of their Tiramisu dessert version….amaretto tirami sù with walnut brittle and white chocolate truffle (according to the menu). The chocolate truffle at the bottom of the plate just melted in my mouth – Mmm!, and I LOVED the chocolatey treble clef design on the left (yes, for THAT I licked my plate! Hahaha!). 🙂 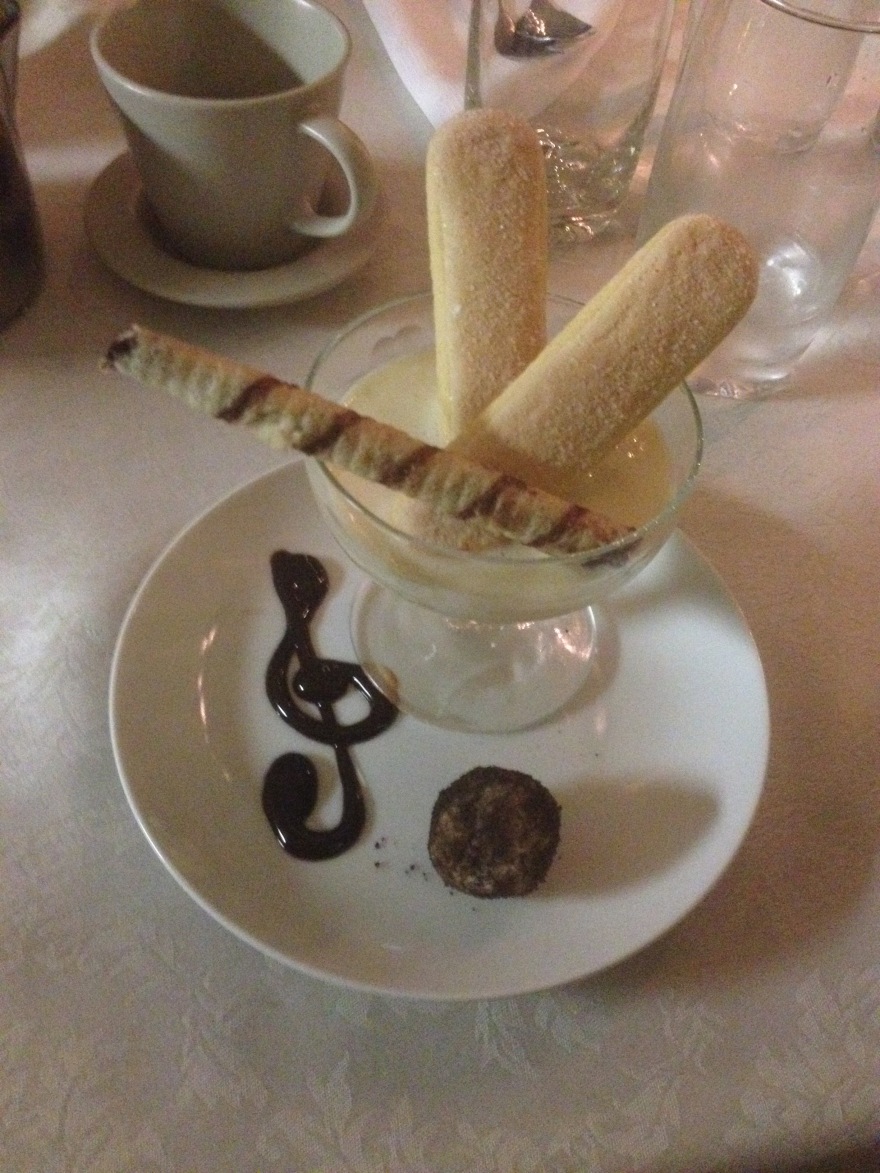 The weather this week has been glorious!  It’s November, and instead of the usual cold setting in, this week’s temperatures have been reminiscent of our September ones!  Everyone I have been talking to has been enjoying this unique warm interlude.

Which brings me to the new someone I met today – and we ALSO talked about the amazing warm weather streak.  Well, this is where the coincidence part comes in, because the warm weather inspired both of us to go outside…..me for my hour-long walk up my country road, and she for her hour-long bike ride where part of her route is along the same country road.

Timing is everything sometimes!

I was on my return leg of the walk and happened to notice something white huddled in front of the fence on the one side of the road.  I was puzzled, because I hadn’t noticed it earlier when I walked by.  As I got closer, the white huddle turned into a human form that stretched back to a standing position.  She had noticed me coming along, and so we each said hi.

Next surprising aspect is that we were new to each other; this was our first encounter.  But as people sometimes will do if they meet along a bike path or walkway, we started talking…..about what we’re doing, about the fine weather, etc.  so, she told me that she’d been taking a photo of something that had caught her eye, and she showed it to me.  She had wanted to capture the sunset’s golden rays as they danced off of a particular plant.  It looked good.

And THEN we introduced ourselves!  Hahaha!  Christine and Michaela.  Christine looked at me a bit more closely and said that she thought I looked familiar somehow and wondered from where.  I didn’t recognize her.  Eventually, we pieced it together.  Via facebook and a mutual friend.  In the listing off of potential mutual friends who lived in town some 10 km away, we quickly found our mutual one.  And things started clicking into place!  Christine and I decided we TOO would connect on facebook once we returned to our homes, and it was then that I noticed another mutual friend…..intriguing, I might add, because I had only JUST met this person last week!

This is when I marvel at the perfect timing……you know, having met Louise (the other mutual friend) the week before, and then the happenstance encounter on the country road (we could have missed each other so easily if either one of us had decided to go earlier as we often did).  And the other two people we knew….that’s where the six degrees of separation comes in.

Life is just SO cool!  I started for my walk, thinking “what kind of nifty things would I see and what kinds of surprises might be in store?”  And even before I met Christine, I had already been enthralled with all sorts of other discoveries on my walk of which I took plenty of photos!

But that’s coming up in a future blog post.  I promise.

(In the photo above, Christine gave me a final wave from her bike as she headed back for her home.)